VPN and DNS Tunneling to Protect the Internet Freedom

VPN, a term that usually is not well understood, means the access of a remote network like if it were local. A VPN is archived using a tunnelling technique which consists of passing one protocol within another. There are several ways to do a tunnel:

Security is an add-on that has been per defacto in the VPN's implementations but that doesn't mean it is part of the concept.

In this article, we are going to talk about the OpenVPN and Iodine (DNS) approaches.

Within its VPN servers, OKay offers OpenVPN Tunneling VPN. OpenVPN has proven to be an excellent option and it is almost the per default selection when discussing VPN's.

In the following diagram, we can see the basic use of an OpenVPN VPN. One or more users will connect to the OpenVPN server. By default, the well-known port of OpenVPN is 1194/udp, however, some networks may block it. OpenVPN allows changing the port, maybe to some others where non-deep-inspection firewall can't block such as 53/udp, 443/tcp, or 80/tcp.

The web servers do not see the original IP from the VPN users, they see the VPN's Server's IP.

OpenVPN servers are very versatile, depending on your needs you can do some of the following:

DNS Tunneling is another technique that OKay's VPN servers are ready to work. Its complexity makes it harder to block, but it makes it harder to configure: users need to have more tech knowledge to make it work and the software is not available in all the platforms. Also, this technique needs a domain name (or subdomain). 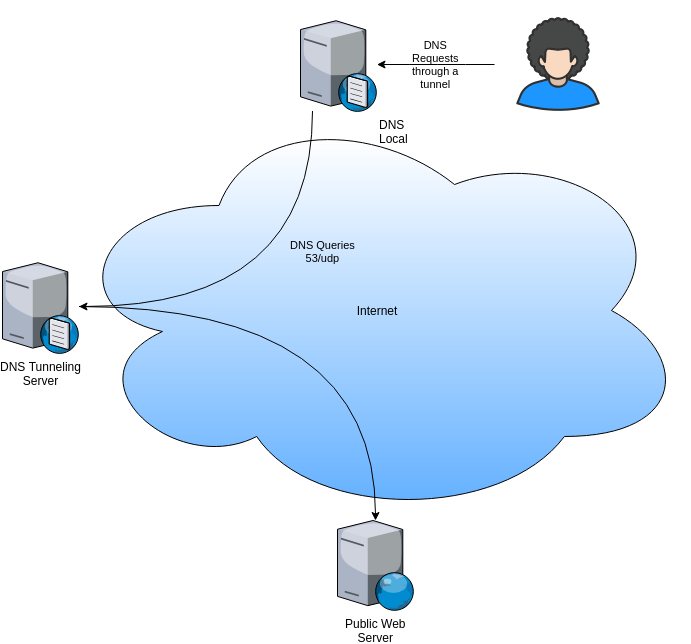 Why is this technique difficult to block? Well, without entering in too many tech details, for starters the DNS protocol is one of the eldest protocols on the Internet, it lacks security by design. Therefore, if a legit DNS query arrives, it needs to be answered. Second, this technique uses a trusted server as a mule, the user's device never tries to reach the Internet by its own, in its place, this technique uses the DNS server which it is almost impossible to block the access to the internet (unless everybody works offline).

However, there is a drawback. DNS tunnelling is slow if you compare against other techniques. A TCP packet usually is 1500 bytes long, a UDP packet (DNS uses UDP) is usually 512 bytes long. So, a TCP packet needs to be fragmented and sent back in three DNS requests which makes it way slower.

How do I get one VPN Server?

An IT Company whose mission is generating value with low cost of ownership.

We will offer you Linux based solutions that satisfy your needs. We focus on VoIP & Linux, but we are up for any other challenge you may want to bring.